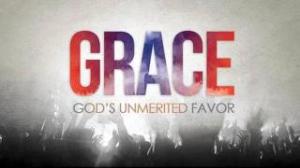 Just over a month ago (December 14, 2012), the holidays were fast approaching, and I was looking forward to several things. For instance, all of my kids would be home for Christmas, I was about to turn 50, and some much needed time off from work.  On that particular day, the word grace had been on my mind.  I was thinking about how “Grace” is God‘s unmerited favor.  I don’t deserve His grace, and I definitely didn’t earn His grace.  God gives me grace despite my weaknesses.

The morning of the 14th, I posted a simple picture about grace. It was only the definition.

On the afternoon of the 14th, when I got home from school, I drove up to my house to find my son, my husband, my youngest daughter & her best friend, my mom, and the police…all outside of our house.  I remember driving up and thinking that something was not right.  As I got out, I was met by many, to say that there was a break in and we had probably been burglarized.

The two police officers, one off duty (Officer Prichard) who heard the call and responded first, and the reporting officer both entered the back of the house to see if it were safe to enter.  The front door had been jammed so that no one could enter during the burglary. The burglars actually used our grill accessory to crash through the glass of the back door.

Upon announcing that the house was safe to enter, the officers asked if one of us would come inside with them to scan and make an initial report of what was taken.  I volunteered, and as I was scanning the house…it seemed so surreal.  While the officers were asking questions and taking pictures, I realized that things could have been so much worse.  You see, my youngest has been diagnosed with rheumatoid arthritis, and sometimes stays home with the pain.  She is a high school freshman, and my mom lives across the street; therefore, I feel okay with her staying home if she needs to.  Needless to say, her room was one of the rooms burglarized.

In fact, the downstairs bedrooms were pretty much the only rooms hit.  Again, it could have been so much worse.  The burglars only went for things that could possibly be put in a backpack and/or carry out with straps.  The burglars pretty much took all the good jewelry I have ever owned…that I had collected over the last 35+ years.  Some were heirlooms, and some semi-precious items.  They took two laptops (one with our family photos), our family video camera, and some music and gaming devices.  There were some other things; but, I was thankful that it wasn’t worse.

I need to make a side note here before I go any further.  The last few years have been a big learning curve for our family.  We have experienced many ups and downs…with different family members moving out and some returning home (that’s another story).  The reason why I’m bringing this up, is that my youngest writes poetry (one which is on this site called “Beauty Is…”).  She also writes stories (with great details), and creates art.  She’s extremely talented, and yes…I’m biased.  Anyway, her laptop was extremely important to her.  Her inner most thoughts, trials & tribulations, and dreams were on that computer.  It was also a way to stay in touch with her best friends that moved to Alabama, and her older sister that had gone off to college. It was really like a safe haven for her.

Once we made the initial report, I returned outside to talk to the others.  Glancing to the side, I noticed that Jess had a metal pole in her hand.  It’s used to turn the water off at the street, in case of emergency.  I was talking with one of the officers, and my son and husband, when I heard this blood curdling scream.  My first thought was that Jess had fallen on this metal pole, and it stabbed her.

It was probably one of the worst feelings that has ever come over me…except from a bad dream.  After I realized she was not physically injured, I went over to her to see what was wrong.  That was when Officer Prichard had told me that he had told Jess the rooms that had gotten burglarized, and that the laptops had been taken.

That blood curdling scream was the agony she felt by someone invading her space, and just snatching up her very intimate thoughts.  I was just thankful that our cats were okay, or that would have just added to the injury.

I have never heard her say anything really bad.  If you read her poem (‘Beauty Is…”), you will have a better understanding of where her heart truly lies.  But, on this day she screamed a cry of disgust.  She asked, “Why would someone do such a thing?”  I thought I don’t know.  I’m sure they were in need of some quick cash before the holidays; but, no one really knows the burglar’s heart (except for God).  Maybe they needed money for something really important.

I remember that it was hard to console Jess.  It’s hard to say you understand, and sorry to something like that, unless you have really experienced something like that.  She’s young, and there is nothing I could immediately compare it too.  We all felt a little helpless.  She looked like an empty shell of a person.  She left the house to go stay at her friend’s house, because we were missing most of the back door…and frankly it’s a little scary.  You begin to wonder if the burglars might return for the rest of the items they left behind.

I realize some of you may be thinking that maybe she was being a little silly, and very dramatic; but, don’t judge her if you haven’t been in that situation.

I posted later that night about the coincidence of posting about grace earlier that day, and how humbling it was for me.  That I, in turn, should show grace toward these burglars.  I was thankful that no one, or cats, were hurt.  I had to accept that things were going to be okay, and that God was good!

Now to the paying it forward part…Officer Prichard, the first officer to respond came over the next day to see how we were faring.  What I’m about to tell you is so awesome.  He told me that he had fought in Afghanistan for eight years and had seen homicides while being an officer; but, he told me that the yell of Jess’ pain and the grief she felt, really touched him.  Officer Prichard went home and contacted some wonderful people. He told them about Jess’ story.  He told them that she was a good student.  He told them that she had experienced some ups and downs over the past year (some emotional and some physical).  He told them about her laptop, and then many of those kind people he contacted, responded to his story of Jess.

With the Christmas season approaching, Officer Prichard, and another officer, came to our house a few nights before Christmas.  Officer Prichard, being the Christian man he is, wanted to make a difference and remind Jess that yes there is bad in the world; but, that there is a lot of good, too.  He emphasized the reason for the season was Christ, and how Jesus gave us the best gift of all.  He died so that we could live.  His grace covers our sins…and even the sins of the burglars.

After reminding us that grace covers much in us that is not deserved, he also said that it’s important to make a difference with our talents that God has given us.  This is where he brought out a new laptop for Jess.  He also presented her with a backpack to carry it in, a jump drive so that she could back up her talent, and a card to upgrade Microsoft office so that she could excel at her school work as well. He also presented me with a laptop, and a printer for the family.

Wow!  I wish I had a camera to capture the look of our amazed astonishment on our faces as when we received our gifts.  God had used this officer’s talent to respond to the cry of one of His children.  He contacted others on her behalf, and others responded.  What a blessing, and for many reasons.  I will actually write  more about this at a later time.

Now, it’s time to use our talents and pay it forward.  Jess has continued to write and create art.  I’m beginning to write again, and we are currently housing a young boy who needed a safe place to live.  It is the least we could do, for what others had done for us…especially God.

So much about God’s love was learned this season.

“Let love be genuine.  Abhor what is evil; hold fast to what is good.  Love one another with brotherly affection. Outdo one another in showing honor.” ~Romans 12:9-10

God’s love is genuine!  Hold fast to what is good.  Show affection to others.  God’s grace covers us all despite our weaknesses.  God has shown/given unmerited favor to us.  None of us are deserving, yet He gave His grace to us freely.  He gave us His Son.

I know this isn’t much; but, at this time I want to personally thank those that were involved in paying forward and making a difference in our lives this season.  There were some that didn’t want to be personally acknowledged for their charitable acts, and I respect that; but, know that we appreciate your gift, and we are most thankful.  I know that God is adding jewels to your crown in Heaven.  A big thank you goes to Officer Prichard, Patty, Cat, Susan & Jack, Al, Terry & Carolyn, and to the many others that responded and helped Officer Prichard make a difference in restoring a young girl’s faith.  I also would like to thank the sweet teacher at my school who anonymously donated a grocery gift card to my family, and my Special Ed department at my school who bought each kid a gift card to help make their Christmas brighter.  God bless you all.

I am a broken person who has chased after many idols of my own making. I tend to acknowledge my regrets more than my rewards. I have three very unique, and wonderful kids. Not only have I been blessed with my own children I have been blessed teaching at a public school. My passion is teaching, writing, and making meaningful relationships. My desire is to be more thankful for what I have received, instead of being upset about what I think I should have received. I also desire to know that I am protected and secured by His grace. To become healed of my past and present shame, guilt, and fear. To know that His grace will give me hope! Through faith I will be assured that His promise of mercy and forgiveness are very real, even if I cannot see it. I want to have a deep passion for His truth.
View all posts by ehairs »
« Previous post
Next post »