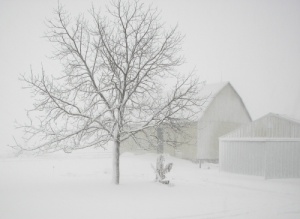 During one of my pastor’s recent sermons, Tom Gibbs, he brought up how farmers in the Midwest would place a rope on their door that led out to their animals in the barn. During extreme weather (like blizzards) the farmers would use a rope to get to their barn to take care of their animals, and then use the same rope to help them return to the safety of their home.

On occasion, a farmer might be stubborn enough not to put out their rope—not anticipating that they might need help getting back to safety of their home. This lack of preparation could ultimately lead to the demise of a farmer. Literally freezing to death near the safety of their own home not knowing how close they actually were to being safe. Because of the “blizzard” in their life, they were unable to see the real hope within the rope that could draw them near to the very place they desired to return.

Today, so many things were going through my head and for some reason I began to think about the game “Freeze Tag“. I thought about how the game Freeze Tag as an analogy to the rope that the farmers might use during a blizzard.  Freeze Tag was a game I used to play when I was a kid. There were times that the game was kind of stressful.  I would get off base, run around, and then try to find the base without being caught.  Usually the stress from the game was fun. While running around I become increasingly careless, and sometimes quite cocky in thinking my skills were good enough to keep me from being able to avoid the danger of being tagged or frozen.

I thought about how my carelessness, on occasion, would cause me to get tagged–becoming frozen. I hated getting caught off base. My lack of focus tempted me and I began to stray away from the safety of the base.

I also remembered there were those, who had been a little more cautious and/or wise, and did not get frozen.   Because they were able to keep their focus, they were able to come to my rescue and “unfreeze” me. After they rescued me, and I became unfrozen, I was then free to continue on my quest of trying to get back to the base. My ultimate goal became not to get caught again and for me to obviously return to the safety of the base.

Going back to the sermon, I began to think about what I had been listening to and learning about while we were studying Hebrews. I thought about how Christ is the base (my safe place). As my passions and desires to “fix”, or change, others grew…I became more confident and carelessly moved away from the base. I began to change His rules that I had begun to learn, back to the old rules I was accustomed to playing.

Then before I knew it, the ways of the world began chasing me, and I became scared of becoming frozen. I began to meet many obstacles and was not sure how to get around them. My anxiety began rising. I became desperate to find the base. All along I was overlooking the “rope” that Christ had laid out for me–to help me get back to the base.

In my confusion, I got tagged and became frozen; but, Christ had plans for me. He knew I would do such things; such as, becoming overconfident, leaving His base, chasing after my idols, and not listening, nor following Him. Knowing this, He placed beacons, in different areas, knowing that I would ultimately look for them. These beacons have seen much because at one time they also did not shine.

The beacons were able to “unfreeze” me. They were able to help me find the rope–which Christ had already paid in full. The rope ultimately led me back to the safety of the base. Then out of the darkness, I realized I had safely reached the base–the Light of my Life.

Christ took some of the old rules and improved them to make some awesome new rules. His rules are meant to be followed and obeyed so that He may protect me. If I listen to Him, draw near to Him, and follow His rules, then I will know that I am protected and secured by His grace.

His grace gives me hope! Through faith I am assured that His promise of mercy and forgiveness are very real.  Like the farmers and their rope…I don’t always see these promises.  The Good News is that I don’t have to see His promises; but be willing to listen and draw near to Him….especially for those times that I get off base.