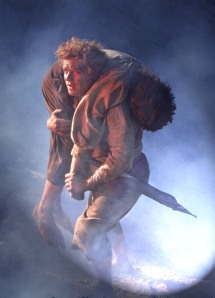 Toward the end of Tolkien’s book “The Return of the King“, Frodo says,

“How do you pick up the threads of an old life? How do you go on, when in your heart you begin to understand there is no going back? There are some things time cannot mend. Some hurts that go too deep that have taken hold.”

Because of my past sexual abuse, I have a few things from my past that the hurts go rather deep.  I’ve thought…could they ever really mend?

My pastor, Tom Gibbs, once told me that, “By giving into the fear of darkness, it will only compound the pain and evil of what has already happened.  By you keeping things hidden it will gain power over you.  Remember, that God is Light and there is no darkness in Him.”

The hope in my brokenness is through the Light of Jesus; because through His Light all darkness shall go away.

My pastor also told me that I had been standing–waiting in the dark.

I have ignored the Light for many years.  While I had been waiting in the dark, I remembered that there was a light that had been behind the “door of my heart”.  I had been longing and hoping for the Light of Jesus to be shed on me.

Come to find out–Jesus’ Light had been there the whole time.  I just needed to turn around, truly see Him, and let Him into the dark places of my heart.

“The Lord is close to the brokenhearted and saves those who are crushed in spirit.”  ~Psalm 34:18

Looking back, I suppose Jesus allowed the memories of my past abuse to resurface because it needed to be dealt with.  Maybe the Lord was reopening these wounds, so that I could truly forgive my self, and others.

For years I felt intense anger, and had tried to ignore my emotions.  I was angry at my stepfather for the sexual abuse he had committed. I was angry about the memories that I had been left  to deal with.  I also felt guilty about being angry.

After studying Psalms, and learning about God’s emotions, I began to learn about my own emotions.  It helped to see some examples of how God felt about certain things; therefore, I was better able to understand, and was able to let some anger go as well.

It has been a slow process; but, I have made some progress.

I’m not going to lie,  opening wounds, is a lot of my own fault!  No one makes me hold onto the past.  The last few years I have been searching as to why I have harbored so much pain deep within.  I don’t want to pick at my wounds keeping them fresh; but, sometimes I find myself doing just that. While keeping them open, it has caused pain for myself, and others. It’s a vicious cycle that had potential to consume me.

In my desperation to find out answers of why others could not understand me…I began hurting them.  I hurt the very ones I cared about.  I might verbally be abusive, and this only compounded the feelings of guilt that I already felt. I began to feel that I was not worthy.  I felt that I was a mistake, or a disgrace, to all that were around me.  Once again the cycle was in place and continuing to gain force.

Sometimes, I couldn’t stand myself  for what I had done; thus, on occasion I hurt myself.  I felt that if I hurt myself–there would be some restitution for hurting others verbally.  However, most did not know that I had sought restitution…within myself.

I began isolating myself.  I thought that  isolating my self from others–would “save” them from me.  In my mind this is how I thought I should “handle” this type of situation. But, in isolating my self, it caused much pain of feeling abandoned…even if I was the cause of my own abandonment.

I have a friend Joey who recently told me that, “the one who abuses is usually the one holding onto their own personal wounds. They never really heal because they keep picking at the scabs, re-opening the hurts of the past and keeping them fresh. Then they lash out at whoever is closest to them, because the ones that originally caused the hurt are usually long gone. The wounding then becomes transferred to another victim. It becomes a vicious cycle unless the abused can short-circuit the circle of pain; thus, the need for a professional counselor to help me.  His name is Jesus and I thank Him every day!”

These were some words to mull over.  These were strong words of wisdom.

I began to continue picking at my wounds–keeping them fresh and open.  I felt few seemed to understand me. I felt others didn’t believe that there was great suffering in my past.  I felt I had to defend myself to others so they could understand. I felt since they had not experienced that kind of abuse…that they may feel how that could have happened. I also felt worse when some didn’t want to understand my past at all…to be discarded.  I felt they were extremely insensitive.  I let these feelings cause great confusion within me.

Now, pondering what my friend said…I realized that Jesus is the best counselor.  My pastor and I had also talked about how the Lord had given me His Holy Spirit–to be my counselor/comforter.  He had been with me always, even when others were absent.  He walks with me right now!

I definitely need to hold onto this truth, even when my way seems very dark.  I know that there will be brighter days!

Knowing this I began to feel safe enough to take steps forward toward healing, and understanding Him.  I have learned that I could trust, and not all would judge me—no matter my mistakes. I was beginning to understand that I was not a misfit.

I tend to see things in night or day.  I am a perfectionist about some things and lack concern about other things.  My pastor told me that Jesus was less interested in me being perfect than in me knowing His mercy and grace.  The very mercy and grace that covers all of my mistakes.

Through great wisdom of many, I have begun to replace my thoughts of guilt with thoughts of His joy, truth, and grace.

Finally I am beginning to feel that I am loved, valued, and treasured.

I know there have been many prayers for me,  some like “Lord, keep Beth from lying to her self.  Pray that she will begin to see Your truth—Your Light.  Prayers like, “May You be a beacon of Light for her in dark places, when all her other lights go out.”

Right before Jesus died on the cross he said, “Into Your hands, Father, I commit my spirit”.

Physically, on Earth, God could not carry my guilt; but, He told me to release it, let Him carry me, and finally be rid of it.

One of my favorite parts from “The Return of the King”, is when Samwise and Frodo are at the bottom of Mt. Doom.  Samwise begins talking to Frodo about the ring and says, “I can’t carry it for you! But I can carry you! Come on!”

The ring had caused open wounds around Frodo’s neck because of the weight of the ring.  Frodo needed to get rid of the ring; therefore, Samwise carries Frodo up Mt. Doom.  Eventually, Frodo was able to throw the ring into the fires…where it was destroyed.

God is telling me that He will carry me.  God would not have brought me to the abuse, and then back to the memories of it, or healing of it, if He could not bring me through it. His eyes are fixed on me.  Like the “refiner’s fire”, God begins to purify me of my past guilt, so that I can be made new in His Light.

Praise Him for His great strength, and Light!