I MUST NOT BELIEVE THE LIES!

I have been recuperating from some unexpected surgery while visiting another country.  I haven’t really been up to thinking much…just sleeping.  But during one of my waking moments, I began to reminiscence about J.K. Rowling‘s Harry Potter series that I have read over the last few years.  Though fictional, the Harry Potter series has touched me in many different ways.  I enjoyed going to see the last movie with my family.  I chuckled when my oldest growing up with the Harry Potter series said that her childhood was officially over…I chuckled because I thought the same thing about myself…hahahahaha!

Thinking,  it occurred to me about how verbal abuse can overwhelm my mind with lies. 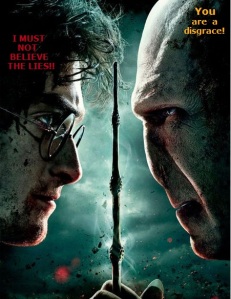 I began thinking about how Voldemort and Harry shared many series of thoughts; very little were good, and most were bad.  I thought about how Voldemort desperately wanted Harry to think that he was evil and responsible for much of other’s pain. Voldemort tried to fill Harry’s mind with horrible thoughts and lies.  Some of those lies took control of Harry’s mind… at times filling him with great despair.

Then I remembered how Dumbledore asked Snape to train Harry in the magical art of “occlumency”.  This was an effort to keep Harry’s mind from being penetrated and influenced by the dark lord (our Satan).

Although occlumency is fictional in the series, it has some useful parallel points to the way I should change my way of thinking.

~ Severus Snape said to Harry Potter (on the difficulty of learning Occlumency): “I told you to empty yourself of emotion! … Fools who wear their hearts proudly on their sleeves, who cannot control their emotions, who wallow in sad memories and allow themselves to be provoked this easily — weak people, in other words — they stand no chance against his [satan] powers! He will penetrate your mind with absurd ease, Potter!“

Now with the above vision in my mind, and since I have seen the movies and read the books, I can begin to understand how verbal abuse has the potential to harm me. I know that many times I think I can deal with these sorts of intrusions on my mind and emotions.  I think to myself…I’m older.  I’m not a kid.  I know the difference between truths and lies; BUT…unfortunately, I don’t believe I truly have the power to deal with such abuse alone.

The reason why I know I can’t do this alone is, like Harry, I depend on “love” to carry me.  The problem is the love I expect to carry me is my own or sometimes “false” love from others, rather than His abounding love.  My kind of love is not what will “fix” the situation. Only His love that is able to fully cover me–will be the kind of love that will be able to truly carry me.

Because I’ve been verbally abused in the past, and hurtful untruths have been told to me, I have often believed what had been said to me…or the person I should become.  I absorbed the lies!  They seemed to be have said in a most forceful way, and they were retained in my memory…as if they settled deep within my mind…crossing over many layers of my memories.  The lies eventually overwhelm my truthful memories and have left me with a memory of guilt and shame that has filled me with the feeling of being a disgrace.

This is an example of how I have let verbal abuse damage my soul.

So what happens if my memories are filled with lies; with vicious destructive untruths that demeans me? Sometimes I think…I know that these lies are not true; but, other times I obsess over the lies and begin to believe them.  The lies literally make me sick!

Indeed I know many things spoken to me are lies. Even knowing some are lies, they still bother me. My memory, in context to the way I think, provides me with the only perspective I have of myself and how I deal with the outside world.  I also tend to connect those lies to my spirit within.

When I think about myself, my thought processes automatically refers to my memory.  My memory may become filled with the concept that I am a guilty, shameful person who is a disgrace to others…no matter how untrue it may be.  It won’t matter–because that is what is left behind in the layers of my mind.  My thoughts have become distorted, and my conclusions about myself reflect the negative, ugly lies embedded in my mind. No matter how much I try to deny the lies, they become a part of how I see and think about myself. My thoughts are no longer realistic.

There becomes a point where it’s almost impossible for me to think about myself without bringing the lies within my memory to the surface.  In essence, I believe that I am those things.  I tend to act upon those lies; which may bring some of them true…which makes the damage even worse…which causes a vicious cycle!

I feel my spirit has become violated.  My spirit (or feeling of strong emotion) stems from within. I want to be good, and deserving of His grace.  It is a feeling of fulfillment, and my life calling to be worthy of His grace.  When my spirit finds itself immersed in a negative view of myself; then, I become that guilty shameful person full of disgrace.

The lies are like darts penetrating my thin skin taking root deep in my soul.  The roots take form as depression.  I literally let the verbal abuse make me sick!

Yes, I’m a sinner.  I deserve to be corrected, and I must be taught that  I can’t control everything…especially the way I think I should control things.  I should not be so co-dependent on others; but, I do think that there are a few that could be confidants.  The problem is that I need to be able to discern what others say…to be able to learn and to discern between the lies and truths.

The One who has consistently been by my side…is the One I should listen to always.  Jesus is for the brokenhearted, and He would never feed me lies.  Jesus, Himself, knows how lies can hurt.  In fact, my lies pinned Him on the cross.

Despite who I am, or who I may want to become…I must not believe the lies!  My counselor has really helped me to envision myself  putting on the full armor of God.

“Finally, be strong in the Lord and in the strength of his might. Put on the whole armor of God, that you may be able to stand against the schemes of the devil. For we do not wrestle against flesh and blood, but against the rulers, against the authorities, against the cosmic powers over this present darkness, against the spiritual forces of evil in the heavenly places. Therefore take up the whole armor of God, that you may be able to withstand in the evil day, and having done all, to stand firm.Stand therefore, having fastened on the belt of truth, and having put on the breastplate of righteousness, and, as shoes for your feet, having put on the readiness given by the gospel of peace. In all circumstances take up the shield of faith, with which you can extinguish all the flaming darts of the evil one;” ~Ephesians 6:10-16

Harry was successful at extinguishing the flaming darts of the evil one.  I, with Jesus‘ help, can also extinguish the flaming darts.  I definitely need lots of practice, and to stay focused.  Thank goodness for His words that tell me how to equip myself for battle.

Praise Him for His love and mercy!

I am a broken person who has chased after many idols of my own making. I tend to acknowledge my regrets more than my rewards. I have three very unique, and wonderful kids. Not only have I been blessed with my own children I have been blessed teaching at a public school. My passion is teaching, writing, and making meaningful relationships. My desire is to be more thankful for what I have received, instead of being upset about what I think I should have received. I also desire to know that I am protected and secured by His grace. To become healed of my past and present shame, guilt, and fear. To know that His grace will give me hope! Through faith I will be assured that His promise of mercy and forgiveness are very real, even if I cannot see it. I want to have a deep passion for His truth.
View all posts by ehairs »
« Previous post
Next post »

One response to “I MUST NOT BELIEVE THE LIES!”